Last sunday, I was buying some greek mountain tea at the Boitsfort market. This "tea" is made of Sideritis sp. and harvested in the Holomonta Mountain in Greece. I then remembered to have seen bunches of dried yellow flowers sold as tea at the Estremoz saturday Market (below, in august 2011). I asked my botanists friends from Portugal and they told me that these bunches were from another species: Phlomis lychnitis.

In fact, we have some large Phlomis russeliana growing in our garden in Boitsfort and the more delicate Phlomis lychnitis grows wild at … Monte das cebolas, close to the river (above, at the end of May 2010). After a quick search, I discovered two interesting uses of P. lychnitis.

First, its leaves, impregnated with oil, were used in the past as wicks for lamps. This is reflected in the plant's popular names: "herbe aux mèches" (in French), "candilera" and "torcida" (in Spanish),… The scientific name may refer to this, although the exact etymology of phlomis and lychnitis is far from straightforward as my colleague Paul-Augustin Deproost suggested me. Some claim that Phlomis comes from Phlox, which refers to flame in Greek and was then used later in latin - but also originally in Greek too as we shall see - for a botanical use, including by Plinus Secundus in his Naturalis Historia. There, he wrote at 21, 64: Florum prima ver nuntiat viola alba, tepidioribus vero locis etiam hieme emicat; post ea, quae ion appellatur et purpurea, proxime flammeum, quod phlox vocatur, silvestre dumtaxat (Transl. by PA Deproost in French as: "La violette blanche est la première des fleurs qui annoncent le printemps; mais dans les endroits plus chauds, elle s'épanouit même l'hiver; viennent ensuite la violette appelée ion, la violette pourprée, et très bientôt la plante couleur de flamme, que l'on appelle phlox, du moins l'espèce sauvage"). "Flame" may thus simply have to do with the firy yellow colour of the flower. Plinus also added at 21, 59 that colore tantum placet Iovis flos, odor abest, sicut et illi, qui graece phlox vocatur (Transl. by PA Deproost in French as: "La fleur de Jupiter ne plaît que par sa couleur, elle est inodore, de même que celle que l'on appelle en grec phlox"). This confirms that Phlox had a greek botanical use too. Moreover, it is unclear whether the word was meant to refer to "flame" or to "flame colour" as it may also simply derive from the old greek use of phlomis that had a directly botanical meaning too. As to "lychnitis", it may come from lychnus, a latinisation of lychnos referring to a lamp. However, lychnis was the greek name of a plant as well. So, while some hypothesize that the etymology of both "phlomis" and "lychnitis" could be traced back to the same meaning, i.e. flame, leading to something like "flame flame", one should not forget that the greeks also used directly "phlox", "phlomis" and "lychnis" as plant names. 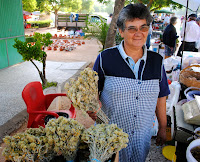 What about the other interesting use of P. lychnitis? Although G. Benitez reports that P. purpurea seems to be more commonly used, especially by Andalusian shepherds, P. Lychnitis is traditionally know to be good for the stomach as an infusion (as well as for other affections, such as haemorrhoids). Popular names reflect a generalist use here: "té de monte" or "té de pastor" (in Spanish). Pardo de Santayana and his colleagues, in a 2005 study of various plants traditionnally referred to as "tea" in Spain report extensive use of it in the south west of Castilla-la-Mancha (Campo de Calatrava). Now we know that there are pockets of users in the south of Portugal too! 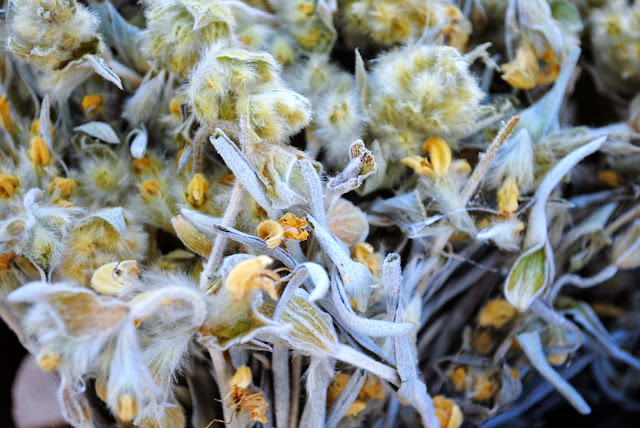