No Monte without its Barn Owls! 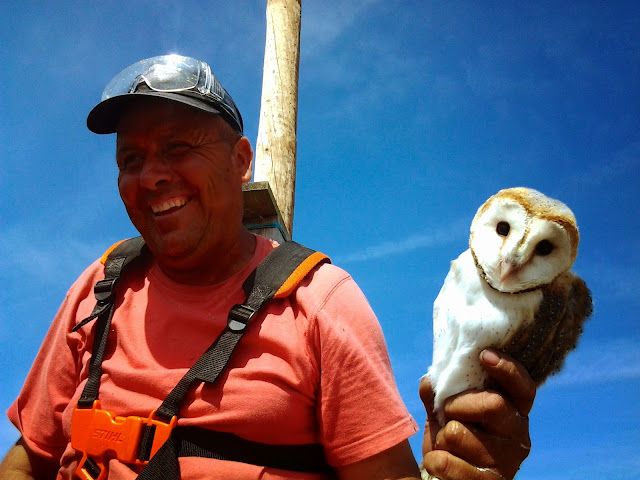 Last summer, we installed a large nest box specifically for Barn owls. No sign of use of this one so far. However, Mario texted us at the end of April. He had spotted 3 large young Barn owls through the entrance hole of another box, one that he had installed back in May 2013. We were delighted!

The kestrel used that nest box last year. And we were indeed surprised in early April not to see kestrels again around the nest on a daily basis. Then J.I. went to check the box a few days after Mario had texted us. It turned out that there were in fact 5 beautiful young birds squeezed in this little box! And here are two pictures taken yesterday by Christien and Leo, two Dutch birders travelling through the Alentejo who were also very curious to see them. You can see J.I. at his best, with his full pilot equipment, enjoying nature in all its abundance! Luckily, the harvesting operations that just ended in the vicinity don't seem to have disturbed the owls. Let's now hope that their first flight exercises will be a success!

One of our dreams has thus come true. No doubt that we will install a few extra nest boxes for Barn owls in the future. We hope that the two adults will go for a second brood this year. We also hope to convince all the hunters of the villages around that Barn owls are no competitors at all... unless they are planning to add mice and voles to the traditional Alentejano dishes. And perhaps are we even going to convince some of our farming friends in the neighborhood that a Monte alentejano cannot be complete without its stork nest and its... barn owl family... Long life to these angels of the night! 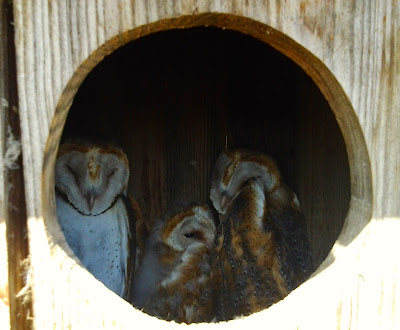