Nina Stepanyan-Gandilyan holds a PhD in biology and is a research associate at the Institute of Botany of the National Academy of Sciences in Armenia. Since 2006, she has been studying pomegranates in Armenia. Punica granatum L. is not only an interesting object for botanical investigation. It also plays quite a unique role in the Armenian ancient and contemporary art, epos, and culture as a whole. This is why Nina also approached Armenian pomegranates from an ethnobotanical perspective.


AG: Nina, one of the topics that interest you in relation to pomegranate is the history of its domestication. One of the strategies to study it consists in looking for places where it grows wild. There are reports of such wild pomegranate forests in places such as Albania or Herzegovina, but also around Armenia. What is your view on this?

NSG: In general P. granatum grows wild in the Old Mediterranean region. In fact, it ranges from the Balkans at the West to the Northern parts of India at the East, Armenia being located approximately in the middle of that area. Pomegranate is a heat-loving plant. Therefore, it grows wild only in the lowest parts (below 1000 m) of this mountainous country. 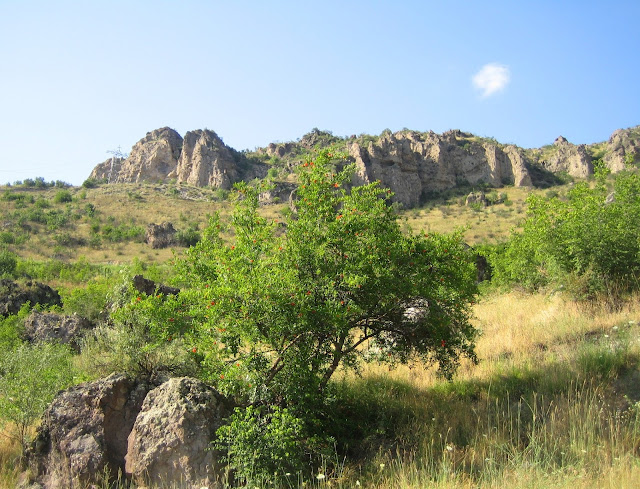 AG: What does the location of these wild forests, be they primary or secondary, tell us about the domestication process of Pomegranate?

NSG: Armenia was densely populated from very ancient times. So, the sparse forests where pomegranate grows wild were always side-by-side with settlements and gardens around those settlements. Due to this, it is difficult to determine whether one or another population of pomegranate was initially wild, or gradually became wild, whether this took place recently, a hundred years or maybe a thousand years ago.

One key is that “secondary wild” populations are not as diverse and multiform as primary forests of natural origin, the former’s existence resulting from human activity. Some Armenian populations of Punica granatum, for example in the Meghri area, grow comparatively far from the villages in plant communities (phytocoenosis) that we refer to as "shibliak" (a type of deciduous bush formation), and in fryganoid vegetation (a xeropythic (semi-)shrub community). Pomegranate bushes from these populations are rather diverse with respect to size, colour, leave or fruit shape, etc. We haven’t come accross an equivalent diversity in pomegranate populations growing wild elsewhere, for instance in Uzbekistan or in Armenia in places located closer to villages. (See Stepanyan N., 2009. “On identification of wild relatives of cultivated plants by the example of Punica granatum L.”, in Flora, Vegetation and Plant Resources of Armenia. Yerevan, Nr. 17, pp. 84 – 88; Stepanyan N., 2010. Investigation of the fruit plants wild relatives by the example of Punica granatum L., in Proceedings of Int. Conf. “Study of the Flora of the Caucasus”, Pyatigorsk, pp. 101 – 102. (both in Russian)).

AG: This being said, it seems that pomegranates do not grow everywhere in Armenia

NSG: That’s right. Pomegranate basically grows only in the northern and in the south-eastern parts of the country, i.e. in the Ijevan, Zangezur and Meghri floristic regions. What is interesting, is that despite this limited distribution, it is still regarded as Armenia’s national symbol. I think that it is a consequence of Pomegranate’s cultivation during the antiquity, of its use in the land, and especially of the role that the Pomegranate played in antique worship on that territory. Before Christianity took over as an official religion in Armenia at the beginning of the 4th century, Pomegranate was the symbol of a pagan deity, Goddess of fertility, beauty and love.

AG: What is the paleobotanical and archaeo-botanical evidence on pomegranate in Armenia?

NSG: In general, the majority of the paleobotanical findings of pomegranate were made in the region including Transcaucasia and the North Caucasus. The available literature points at an origin of the ancestor form of the pomegranate during the cretaceous (i.e. 145 million years ago) or at the beginning of the tertiary periods. In Armenia, fossil Pomegranate were found in southern Armenia in lake diatomite layers from the Lower Pleistocene. Paleobotanists I. Gabrielyan and A. Bruch consider this finding as evidence of the indigenous nature of P. granatum in Armenia. It could be considered as a pre-glacial relict.

With regard to archaeo-botanical data, there are many representations of pomegranate’s bushes, fruit and flowers on different archaeological artifacts and medieval art pieces. Thus, one can see it in stone carvings inside and on the façades of many Armenian churches. One can come across Pomegranate made of the clay, depicted on plenty of medieval frescoes and manuscripts, on the innumerable “khachqars” (cross stones) and on old carpets.

Very often, Pomegranate was depicted as a symbol of the Tree of Life – for example on that illustrated manuscript of the gospel from the first half of the 12th century. 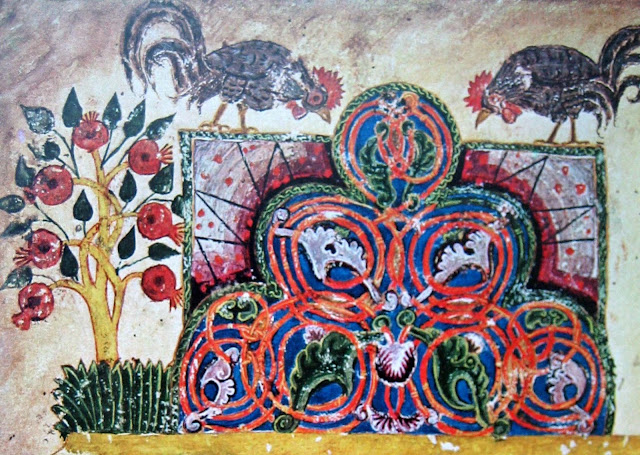 Medieval theologians (e.g. Stepanos Syunetsi in the 7th century, Nerses Shnorhali in the 12th century or Grigor Tatevatsi in the 14th) interpret the illustrations of pomegranates appearing in gospels as follows: the skin’s bitterness symbolizes the Old Testament, wereas the arils’s sweetness represents the New Testament and the Church; the life of righteous monks, full of bitterness and deprivations, bears sweet fruit of immortality, acquired after resurrection.

AG: What is the oldest representation of Pomegranate in Armenia?

NSG: Currently, the oldest representations on the territory of Armenia are known from the Urartian fortresses of Teishebaini and Erebuni, 8th century BC

AG: What have been your own discoveries in this respect?

NSG: The Pomegranate has so often been culturally represented in both antique as well as contemporary periods, that many observers interpreted its presence as constant. However, I have discovered that the expression of that plant in our culture has actually disappeared from the timeline at some point, namely during the early centuries of Armenia’s acceptance of Christianity. So, the Pomegranate, being a widespread ornamental motive in Urartian, Achaemenian, and Hellenistic periods, wasn’t represented from the beginning of the 4th up to the middle of the 7th centuries. We can assume that that gap is a consequence of religious opposition and therefore cultural transition. It appears that during the dissemination of Christianity, it became an undesirable symbol, and that pomegranates were replaced by grapes in church rituals and other aspects of life.

AG: Something else that you find especially noteworthy?

NSG: What I also find remarkable about the evolution of the cultural expression of this plant, is that following that period of absence, an astonishing revival followed. Not too far from Yerevan, there are ruins of the Zvartnots temple, built in the middle of the 7th century. In that temple, there are numerous Pomegranate depictions in distinctive forms, including but not limited to high relief in great sizes. 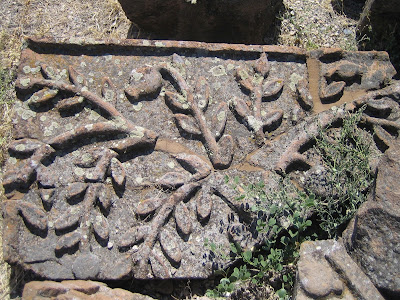 Under the influence of the Zvartnots temple, after the three and half hundred years of absence, this symbol is again represented on many other spiritual buildings – we can see it on different churches erected in the second half of the 7th century. In the next centuries, in high and late medieval periods, pomegranate was a positively perceived floral ornament in all the areas of the Armenian fine arts. The analysis of this data, along with the all-encompassing cultural records of the Pomegranate, allows us to assume that a symbol, which was outlawed for so many centuries as a symbol of pagan Goddess, made an astounding rebirth. This revival can be understood as a reconciliation of an old and a new religion.

AG: One of the peculiarities of Armenia is also its Pomegranate wine. Do we know when this started and whether religious factors explain its unique situation, given pomegranate’s wine production volumes as well as reputation in Armenia?

NSG: Pomegranate wine is mentioned in the Armenian national epic poem “David of Sassoun”. This epos was an oral history, first put in written form in 19th century. But many historical events, reflected in it, date back to the 8th century or even before. So, it is difficult to say, where the production of the pomegranate wine started. However, we are sure that in medieval times, it already existed.